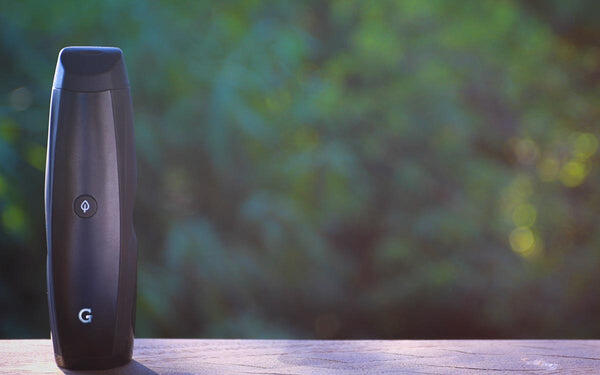 Unboxing the new G Pen Elite from Grenco Science is fairly easy. You don't need assorted cutters and talent to figure out the hidden locks and tapes. Moreover, the package itself is intriguing yet simple.

The cylindrical box boasts heat shrink plastic wrap which can simply be peeled off with no trouble. Once you get rid of this protective coating simply open the lid and pull out the G Pen Elite vaporizer and the rest of the goodies packed with it.

Incidentally, the box contains the following apart from the device -

Alright, so let’s begin with the review. First off, the new portable vaporizer from Grenco Science is a stunner. No doubt whatsoever. It is a dry herb device, and as the company website says it is a quantum jump from its earlier variants such as G Pen Herbal and Micro G Pen vaporizers in terms of technology.

The G Pen Elite body is made from plastic but the overall feel is that of a space age material. The shell is super smooth, dazzles with silver micro particles when held under the light or looked at from a certain point of view.

However, the slick finish also means handling the device especially while opening the mouthpiece and or during the vaping session requires dextrous pair of hands. I will come to that later.

Coming back to the exteriors, the Grenco G Pen Elite vaporizer is ergonomically designed and features seamless LED factor that displays an array of metrics such as temperature control and battery life indicator.

Credit goes to the design engineers at Grenco Science for creating such a well-structured device. I mean the display and other parts are so unlined and flush that sometimes one wonders if it is made from a single unit, especially the display which makes its presence felt only after it illuminates.

Although, the company and the product literature declare G Pen Elite as a hybrid vaporizer, that fact is, it is a pure conduction device. The convective effect takes place because of the way it is engineered.

When the user inhales the air, the same typically passes over the dry herbs roasting it further and thereby providing a fuller and uniform flavored vaping session. Now, just because the user initiates the convective process doesn’t mean it actually is. Got the idea?

So, let’s talk about one of the most critical elements of any portable vaporizer – the oven or loading chamber. Although its size vis-à-vis the device itself is pretty impressive it nonetheless makes loading chore a little tricky.

Moreover, as mentioned above, getting the mouthpiece off is a task in itself. The smooth, highly machined parts simply refuse to provide the necessary grip. It requires some talent and patience to get it off. Coming back to the oven, the capacity of .75 grams is just not enough for a long session.

However, it makes a great choice for those who are either beginners or ‘short burst’ vapers. On the positive side the all ceramic chamber roasts the dry herbs in a uniform way which in turn provides a fuller and intense vapor.

The verdict as far as packing the chamber is concerned; it is a little cumbersome, especially for people with thick hands and fingers.


Powering the G-Pen Elite Vaporizer is a simple affair. I simply needed to press the small button in front of the panel five times. That’s it! The device instantly came alive and the G symbol suddenly lit up tearing through the plastic body.

Like I mentioned earlier, these displays are truly flush and their presence is only noticed when they come alive. Setting the required temperature is also a breezy affair.

You just need to toggle between the two buttons at the side to set your preferred temperature. Once set, simply press and hold the home button for a second and then release. The digital display once again sparkles as the temperature climbs up or down to the targeted digit.

Also Read: Why do vaporizers have adjustable temperature

The super solid lithium-ion battery and smart-chip technology lowers the heat up time drastically. In fact it took me under 90 seconds to take my first drag after setting my preferred temperature which incidentally hovered around 190°C. The Elite's high-performance battery life makes sure the vaping sessions offer a satiated experience.


One thing which I noticed and then later got it confirmed after reading several reviews was the relatively warm vapor that G Pen Elite produces. Over several draws and vaping sessions the mouthpiece tends to feel a little hot.

The reason for the extra warmth is because the heating chamber and the mouthpiece are arranged too close to each other. There are no cooling tunnels or chambers to let the vapor get rid of that extra sting.

It also resulted in that dry sensation after several draws. However, the vapor quality is excellent and it overrules the extra warm cloud. G Pen Elite offers potent, intense and fuller vapor that is sure to bring a smile on the lips of experienced users.

Except for a couple of minor issues, the G-Pen Elite is a great product from Grenco Science. I would highly recommend this portable vaporizer, especially to beginners or people who have just started out. It is also a must have device for those who are looking for a discreet vaporizer which is easy to operate and doesn’t overwhelm with complex set of buttons and settings.

This trusted information is sourced from the manufacturer and our own experience using the product.

Share on
Previous Reading 3 Easy Ways To Make a Cannabis Tincture
Next Reading Which are the best vaporizers for beginners?
Filter
All topics
View All Collections
Search
0