Apple’s Vaporizer App Ban - Everything You Need to Know 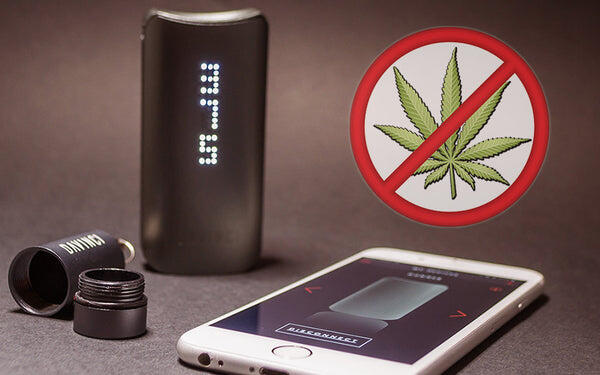 If you’ve purchased a shiny new vaporizer in the last 5 months or so, you may have had a bit of trouble downloading any accompanying app on your iOS (Apple Operating System). And by that I mean you weren’t able to download it at all.

There’s a good reason for this - as of November 2019, Apple banned all vaping apps from their operating system.

But why on earth would they do such a thing? And what does this mean for vapers who would like to use their vaping app? And, of course, what are the wider-reaching implications of this ban? For the crucial details of the Great Vape App Ban of 2019, read on...

The Vape App Ban: What is it?

Basically, Apple made the decision to ban all vaping apps from the Apple Store in November 2019, and as such many customers are now unable to take advantage of this particular option.

Apple removed a total of 181 vaping-related apps from its app store and has subsequently banned their presence on the platform indefinitely.

Why Did Apple Ban Vape Apps?

Very simply, Apple’s decision has been made in response to alarming, and increasing reports of vaping-related illnesses, and even vaping-related deaths.

The banned apps include store apps, games, and hardware apps that accompany many vapes on the market today. And, Apple has not been specific - all apps are banned, whether they are for e-cigs, concentrates or dry herbs.

The app isn’t just an app, either. It allows you to control every aspect of your vaping experience with the desktop vaporizer, remotely. An app is a great option for people who like quick and easy controls, and overall easier-to-use controls.

Apple made the following statement about the decision:

“We’ve updated our App Store Review Guidelines to reflect that apps encouraging or facilitating the use of these products are not permitted. As of today, these apps are no longer available to download. We take great care to curate the App Store as a trusted place for customers, particularly youth, to download apps. We’re constantly evaluating apps, and consulting the latest evidence, to determine risks to users’ health and well-being.”

Apple is the first company to take such drastic action against vaping and is the first to, in not so many words, condemn vaping as a whole as unhealthy. And, as the condition called EVALI (e-cigarette/vape-product use associated lung injury) continues to make people sick (and worse), they might not be the only ones.

It’s important to note that the sale of tobacco, vaping cartridges, or anything else you can vape has never been allowed via the App Store.

The assumption that Apple is making is that there is a direct correlation between vaping apps and app-related illnesses. Although there is tangible evidence that something about vaping is doing so, the waters are as yet very murky.

The Vape App Ban: What does it Mean?

So, of course, we’re all wondering what the vape app ban means specifically? Take a look at our list of what the app ban could mean for you:

So, if you have an Android phone, you can still install vaping apps, and if you installed a vape app on your Apple device before the ban took effect, it won’t just disappear.

The Vape App Ban: How Does it Affect Vapes?

Most contemporary vapes have apps that all do specific and varying things depending on the device. As such, it’s important to have an understanding of how the ban will affect some of the best selling vapes out there:

The good thing is that the PAX 3 still functions perfectly as a basic vape for both dry herbs and concentrates (the highest onboard heat setting will vape those concentrates, don’t worry). So, the 4 onboard temperature settings, the battery life indicator, and games are also not affected.

The bad thing is that many of the fun, high tech features the PAX 3 has to offer is only found on the app. So, the app is important in this respect - you lose functions like fine-tuned temperature control, and access to different heating profiles (Boost, Efficiency, Stealth, Flavor).

The Storz & Bickel app is compatible with the Volcano Hybrid, the Crafty, and the Crafty Plus. As the app functions differently with each, the overall loss will vary depending on the vape you have:

The biggest change when using the Firefly 2 Plus without the app is that manually learning how to control the temperature range isn’t as easy as it could be. However, with 7 onboard temperature settings to choose from, including the highest for concentrates, once you jump the hurdle of actually learning the manual workings of the vape, the ban doesn’t have much of an effect.

Also Read: Why Do Vaporizers Have Adjusyable Temperature Setting

Again, the IQ and IQ2 can function quite easily without the app. As it was one of the first vape companies to introduce such a feature, DaVinci has always modeled their apps as more of a perk than a necessity. So, there is still full on-board temperature control and Smartpaths (although these can no longer be customized).

The MV1 isn’t heavily reliant on its app for basic functioning either, and like the Firefly 2 Plus, the biggest loss is convenience. But, once the manual controls are learned, the loss of the app won’t affect the overall experience.

The Vape App Ban: Which Brands Have Taken Action?

Their new Web App can be accessed and used with the most current version of Google Chrome and basically troubleshoots the Apple ban entirely. Users can access the web app to adjust settings on the Crafty and Crafty Plus via Bluetooth.

However, as it is still a work in progress, the web app does not yet support the Volcano Hybrid, but Storz and Bickel assure that this will soon be the case.

The Vape App Ban: What are the Consequences?

As we’ve seen, most basic functionality for even the vape brands that have fully embraced the app revolution will not be lost. The true consequences of the vape app ban will take time to unfurl, but they might not entirely be exactly what Apple is expecting.

If Apple introduced the app ban to curb vape use in general, they aren’t taking into account the ocean of black market vaping activity that bypasses such technology in the first place. And, indeed, much of the illness linked to vaping has been linked back to these black market, unsophisticated devices.

What’s more likely is that the ban will affect those who use vapes for medicinal purposes, or who for a myriad of different reasons need this kind of sophisticated technology to track their dose or set limits on their draws.

But, as stated above, it’s difficult to determine the extent and specifics of the ban’s effects as yet. Only time will tell if it leads to the consequences that Apple desires.