Why do vaporizers have adjustable temperatures? 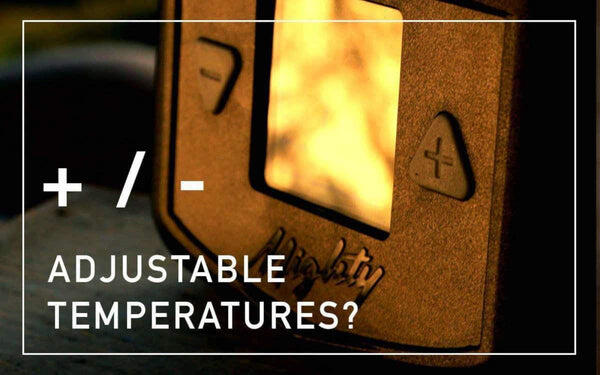 Let’s face it! The size of vaporizers is shrinking every year. Even the designs are undergoing startling changes while the internal workings are getting so complex that at times it looks more like a crucial part of a long-distance ballistic missile than just a good old vaporizer whose sole purpose is to offer medicinal and leisure elevation.

Apart from the diversity in terms of form factor, building materials and state of the art workings the one common feature which every vaper worth his/her salt looks up to is the provision of temperature control.

So, what is so important about this feature? Why do regular vapers crave this characteristic? There are three reasons.

The quality of the vapor is also dependant on the heating chamber or the oven. Therefore, most of the popular vaporizers these days offer out of the box oven designs.

In a sense, it is not just about temperature control. It is also about the way the raw ingredients are roasted. Here are some tips for those who are in the market to buy vaporizers but don’t have the required knowledge.

Also Read: WHICH ARE THE BEST VAPORIZERS FOR BEGINNERS

A battery plays a crucial part in generating heat in any portable vaporizer. However, the role of the atomizer cannot be ignored. The atomizer typically draws power from the battery and depending on the temperature selected by the vaper extracts enough juice from the battery to break up the ingredient into small particles or “vapor” as it is popularly referred to.

Interestingly, it is the way the raw material is heated which differentiates the vaporizers. While conduction based devices roast the raw ingredients directly, the convection type generates heat in one place which is then guided over the dry herbs/oils/wax through a controlled chamber to break it down into vapor.

The choice depends on the buyer. Convective vaporizers are considered better in terms of efficiency and quality of vapor that it produces. The dry herbs generally last longer in these vaporizers.

Several vaporizer brands now come with smart settings pre-built into the device. These can be further tweaked through a Bluetooth app. Smart settings are good for novices who are not comfortable fine-tuning the temperature.

If you fall into this category make sure your vaporizer offers this feature. Vaping sessions can be fun with such devices as it requires minimum effort from the user.

Even advanced users sometimes get carried away which results in burnout of raw ingredients. If this happens the very idea of vaping instead of smoking is defeated. Burnt ingredients can release toxins from the vaporizer which in turn can not only ruin the vaping session but result in nausea and sleepiness.

Also Read: Why do People Vape

Dry herbs, Oils or Wax – Which one to buy?

While some prefer dry herbs there are others who love oil based compounds, and there are still others who would rather go for wax based botanicals. Vaporizers are generally built to process one of the above mentioned raw ingredients. Nonetheless, several manufacturers have now started offering vaporizers which accept all kinds of vaping materials.

These vaporizers typically boast multiple ovens, each one reserved for specific use. As a buyer, if you feel you just need a single input device then narrow down the choice accordingly, because multi-functional vaporizers obviously cost more.

These devices, due to their complex design, provide enhanced vaping temperature control features. The optimum heat for the three ingredients varies sharply, and therefore it needs the right kind of presets. Go though the manual, read reviews and excerpts. Over a period of time you will definitely find the right vaporization temperatures.

Talk to other vapers. Discuss your preferences and limitations. Vapers with years of experience can guide you in the right direction. These people can blindly tweak their settings, depending on the ingredient stuffed in the oven.

It is a known fact that burnt botanicals generally leave behind a dark residue unlike others where the remnants are light colored or brownish in shade. However, the residual color also depends on the type of ingredient that is used during the vaping session. Most of the herbs tend to get burnt with temperatures beyond 230 degree.

As mentioned above portable vaporizers come in an array of shapes and sizes. One of the popular devices in this category is the pen model.

Is the pen variant a good option when it comes to different temperature settings?

The simple answer is no! The reason being most of the pen vaporizers do not have settings. It simply means the herbs are heated instantly and then based on the built-in timings let off to cool before the cycle begins again.

Incidentally, most of the pen models function in a similar way. It leaves behind residual material which like mentioned above is dark in color – a warning that the herb was burnt. It also means unhealthy and unsatisfying vaping session.

However, there are exceptions – not that they boast this feature but the way they are designed. For example Atmos Nano, Kiln and Boss offer a satisfying experience in spite of lacking the temperature calibration feature.

These models do not result in overly dense vapor, but offer a great vaping experience, and at the same time do not produce unhealthy by-products associated with over-burnt herbs. This can be gauged from the residue in the oven once the session is complete.

Incidentally, most of the pen vaporizers have coils as their primary source of heating. It results in instant vaporizing and the effects of inhaling are startling to say the least.

While there are many who love instantaneous relaxation offered by these devices there are others who feel a pen cannot be categorized as a vaporizer because it lacks specific temperature control feature. This is especially true when used with non-herbal ingredients.

Many vape enthusiasts claim that pen models are good for quick and short sessions, and almost everyone agrees for the fact that dry ingredients offer improved “High” quotient.

The Volcano desktop vaporizer from Storz and Bickel claims that the following temperatures are optimum for the following aromatic herbs. The company claims that Lavender typically offers unmatched sense of relaxation at 130°C while the second most preferred compound the Lemon Balm hits the sweet spot at 142°C.

Yet another desktop vaporizer which provides temperature control feature is the Arizer Extreme Q. Once the device is tweaked for the right temperature, and the relevant aromatic compound added to the porcelain dish, simply turn on the fan.

The room literally fills up with mind and muscle soothing fragrance. The relaxing ambiance can further be enhanced by adding flower petals and assorted flora ingredients. This is the magic of optimum temperature control.

What about portable vaporizers?

As per Arizer reviews, the best setting for Arizer Solo is either 4 or 5 depending on the person. In spite of boasting 7 presets the Arizer Solo as mentioned above provides unmatched vapor quality and feel.

However, the character of the cloud and its density also depends on the heating elements used in the vaporizer, the material of the oven, its passage and the presence or absence of thermal cooling.

Incidentally, the Arizer Solo does not allow small increment tweaks, typically 1 degree Celsius, like other vaporizers.

On the other hand, the DaVinci Ascent Sport allows users to build their own presets. The best temperature range hovers between 185°C to 193°C. The device can be set to 230°C maximum.

Be forewarned that exceeding some of the stipulated temperature ranges can cause severe combustion not to mention poor vapor quality and power drain.

Let’s take a look at one of the popular vaporizers, the Arizer Solo and the recommended seven sweet spots.

Although optimum temperature setting is a personal choice and varies from vaper to vaper, it definitely plays an important role in achieving the right “High” or “Comfort” quotient. Moreover, presets may work for some while others may prefer to build their own “Sweet Spots”.

A vaporizer which boasts presets and precise control options turn out to be more popular within vaper communities. It offers them the freedom to experiment.