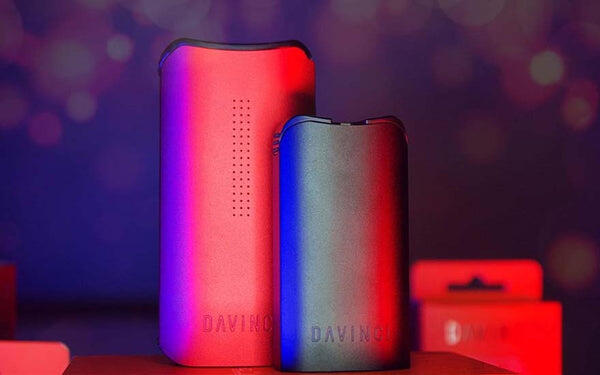 Let us take a deep dive into the difference between the Davinci IQC vs Davinci IQ2. Regarded as one of the best conduction vaporizers made to date, the IQ2 is on the pedestal. We’re also going to talk about the new DaVinci IQC released in 2021, and whether it knocks the IQ2 off its well-earned spot at the top.

When comparing Davinci IQC vs Davinci IQ2 they are both faithful to DaVinci’s mantra of creating stylish yet discreet devices. This is something we’ve come to know and love from the original design of the IQ. Both vapes are made from gorgeous sandblasted aluminum, giving the professional and sleek look I personally love from DaVinci.

Immediately, however, we see the first major difference when comparing Davinci IQC vs Davinci IQ2. The IQ2’s lid is made of the same material as the body, sandblasted aluminum, whereas the IQC is made from a bolder antimicrobial black polymer. This design change has been made with both price and function in mind. Also, knowing that the polymer is made from an antimicrobial material shows more thought went into the choice of plastic than just price.

The next exterior difference of note is that DaVinci have decided to remove the air dial found on the bottom of the IQ2. It's been replaced with a non-functional DaVinci logo in the IQC.

This has given the IQC a sleeker overall look, but has definitely caused a slight impact on the airflow and quality of the IQC compared to the IQ2. I will delve into further detail later... Overall, both devices are extremely similar in design, keeping to the style we expect from DaVinci, which doesn’t come as a surprise.

Both devices were designed off of the same base, each contain DaVinci’s adjustable heating pearl, which allows you to adjust the heat conduction. This can be useful for microdosing, for example.

The IQ has a major edge when it comes to heat-up time from a cold start. Testing both devices, the IQC’s heat up time came to just shy of 30 seconds, whereas the IQ2 came up to temperature in around 60 seconds. Half the heat-up time is an incredible performance boost in the IQC, and I’m not sure how they’ve managed to achieve it, but I’m all for it!

They use the same Smart Path temperatures, the same precision temperature mode and the same boost mode. All on the same interface, which has been around since the original IQ, so either device is intuitive to use if you’re used to any DaVinci device. Just to remind, I’ve listed the different presets and their modes below:

Smart Path™ Mode.  It will give you a range of preset temperature ranges to choose from with the app. Each preset begins at the lower temperature and increases to the higher temperature over 8 minutes:

Precision Mode. This mode allows you to set the temperature of the device to within 1 degree of accuracy. This allows you to get that precise vaporizing point you need to get the flavour profile you like.

So, when it comes to temperature control, DaVinci provide everything you want from a modern dry herb vaporizer.

This is another area where the DaVinci IQC reigns king over the IQ2. Both devices have the exact same 18650 batteries we’ve come to see in many modern dry herb vaporizers, such as the XMAX range from TopGreen for example.

Where the IQC has the edge, however, is the USB-C charging DaVinci have implemented. I love USB-C, and I firmly believe every vape manufacturer on the market is lazy and just stretching to save pennies if they aren’t including them in their devices.

DaVinci seem to be keeping to a theme with the updated model, as the IQC took half the time from a flat battery to fully charge, compared to the IQ2’s 4 hour charging time via USB micro. Using the same flower and amount I compared the two devices during a few sessions. I did this to understand which device tasted better, had better clouds as well as density and airflow.

The first notable difference is that of the ceramic zirconia mouthpiece of the IQ2. It has a better flavour when compared to the high temperature silicone mouthpiece of the IQC. Unfortunately, the flavour profile from the IQC isn’t as neutral as the IQ2 due to the taste of the silicone slightly impacting the vapour slightly.

Airflow was the other immediately notable difference I found. Being able to adjust airflow on the IQ2 is something I sorely miss from the DaVinci IQC. If you like a very easy draw, you might find it difficult to achieve such airflow from the IQC. When compared to simply adjusting the dial on the bottom of the IQ2, the IQC drops the ball here.

There isn’t much else to say, the IQ2 simply outperforms the IQC in each manor. The clouds are denser, purer, more potent and smoother than the IQC. This isn’t to say that the IQC is bad, it just doesn’t seem to be quite up to the incredible reputation of the IQ2.

The DaVinci App work on both vaporizers and it's available on all platforms. But still a bit more of a pain to get working on IOS as you have to manually install it.

It functions the same on both devices, coming with the smart path, precision temperate and stealth mode controls. The only difference between the two is that the real-time dosage tracking feature you get with the IQ2.

To disable Bluetooth in both devices by pressing the temperature buttons simultaneously 5 times within a 4-second window. Disabling Bluetooth will help preserve battery life in either vape.

Both devices are based off of the same design, and can be taken apart right down to the ceramic chamber. Cleaning is the same for both, and this is the method I use:

DaVinci explicitly state in their manual to avoid using abrasive materials to clean your device. As damage may occur to the oven or vapour path.

DaVinci gives each of their devices a 5-year limited warranty. So, if any manufacturing defects over normal use, they will repair the device for you. This doesn't include normal performance degradation.

They are both compatible with nearly every accessory DaVinci offers to the IQ range. Each come with the packing tool which hides itself neatly under the lid, and both can be used with DaVinci’s Zirconia Ceramic Spacers, Dosage Pod Holders, Stainless-Steel Dosage Pods and can accept spare 18650 batteries.

The only difference is that there is no concentrate option for the IQC vs IQ2, so if you’re looking to vape concentrates, then the answer is here.

To me, it’s worth paying for the IQ2 due to the better quality materials used, the battery lasts longer when fully charged and the dial on the bottom allows you to achieve airflow to your preference.

If you’re on a budget, want a vape that heats up mega fast and charges fast and still want a quality vape from DaVinci, then the IQC is a fantastic choice. However, if you’re already an owner of the IQ2, there isn’t really any need to update to the new model. And if you’re looking to get into the DaVinci ecosystem and willing to spend the extra pennies, then the IQ2 is the better choice here.

The upgrades included in the IQC, such as the USB-C and faster heating and charging time, in future DaVinci models. Maybe then it will be worth updating from the IQ2.