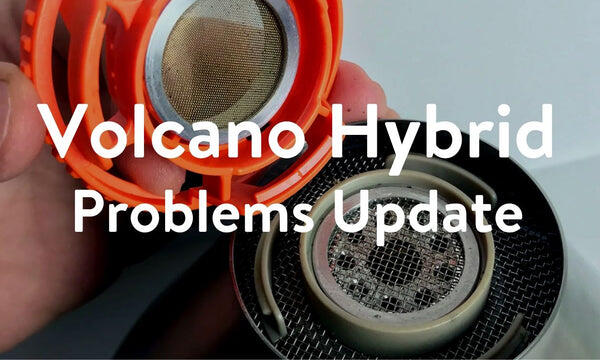 In the last few weeks, a consistently growing buzz has fluttered internet forums and websites and has added an element of unease to the devoted vaper’s holiday experience. The irrefutable kings of the dry herb vape community, Storz and Bickel, and their newest prince, the Volcano Hybrid Vaporizer, have come under hitherto unknown scrutiny amidst reports of melting chambers and aluminum residue.

The word ‘melting’ is indeed alarming, and to have it associated with such a titan of a brand might come as a bit of an ungraceful start to the new decade. But, before we let the internet run absolutely wild with speculation and conjecture, let us explain what is known about the issue, what is being said about it online, and why it matters.

Volcano Hybrid: What are the Issues?

Although this is a developing story and Storz and Bickel have not released an actual statement about any unforeseen issues with the Hybrid as yet, many retailers of the Hybrid have already suspended selling the vape until Storz and Bickel do release an official comment. So what are the issues that have come to light with the new Volcano Hybrid so far, exactly, and what are the repercussions?

It seems that some customers who have purchased the new Hybrid have experienced melting issues with the Hybrid’s chamber housing, causing the component to warp, form black spots, and bubble, not to mention cause potentially dangerous fumes.

Aluminum Residue on the Rings -

It appears that some kind of dust residue is forming on the aluminum rings. The rings on the bottom of the chamber and the heating ring, after only a few tightenings and loosenings of the chamber, produce what looks to be aluminum dust. Customers are of course concerned that this residue contains metal particles that can subsequently be inhaled.

Volcano Hybrid Issues: What are the Concerns so far?

Because Storz and Bickel have not released a full statement regarding either issue, consumers have been left to speculate the true meaning behind these updated instructions.

Of course, a major concern is that aluminum particles from the residue found on the metal rings of the device will work their way into the user’s vapor and subsequently their lungs. As Storz and Bickel have been known for over a decade as creating arguably the safest medical-grade dry herb vapes in the world, the damage that such a scare could cause is unprecedented.

Although Storz and Bickel have yet to address the melting chamber issue directly, this might be even more of a concern for users. Smoke from burning plastic is certainly not something that anyone would want to inhale, but this aside, burning plastic causes a very real, very legitimate, immediate fire safety concern.

Customers will, of course, be wondering how two major issues were not caught during the robust quality control process Storz and Bickel have been known to encapsulate.

As both issues can cause direct harm to the user, this airtight reputation will fall into question until Storz and Bickel have made a full statement. Moreover, as retailers are already halting the sale of this item to the public, the company is surely already losing sales.

Along this same train of thought, the updated instructions to clean the chamber thoroughly after every use may seem daunting and concerning to consumers who are, understandably, paying a large amount of money for a desktop vape that should work perfectly without much interference and maintenance.

How Storz and Bickel handle this emerging issue will, of course, have a lasting effect on the reputation of the brand. What’s certain at the moment is that for a brand whose reputation rests so much on safety and health standards, these concerns will not be ignored by the customer base who has come to rely on them.

A speedy, and detailed, response from Storz and Bickel is not just desired by their customers but is surely deserved. Please stay tuned as we receive new information regarding this issue as this blog will be updated with any emerging information.

Also Read: Why Storz and Bickel

When this article was first released, Storz and Bickel has not yet made any kind of official statement, but the brand has sent an email to retailers to highlight an updated version of their instruction manual for the Hybrid with a few significant alterations.

For one, the original instructions read that to attach the filling chamber, the user should turn “clockwise as far as it will go.” However, this has appeared to cause the threads to become over-tightened, which has subsequently led to the issues mentioned above.

The new manual states, “when screwing the Filling Chamber onto the VOLCANO HYBRID, please make sure not to apply too much pressure and not to over-tighten the threads. Otherwise, the device could be damaged and introduce health risks to the user.”

Additional instructions for cleaning are also included. These state, “as recommended in section 7.8 of the Instructions for Use, the Filling Chamber is to be thoroughly cleaned on a regular basis.

In addition, please use a damp cloth, not dripping wet, and soaked only in water to wipe over the parts of the Filling Chamber. This will remove leftover residue, dust or particles which could potentially enter the airstream.”

However, the brand have since addressed the filling chamber issue by providing a free of charge replacement stainless-steel Filling Chamber Cylinder with a stainless-steel insert, and instructions on how to start this process. All users have to do is add the Volcano Hybrid H

eating Element to their cart (of which there is a link for below the statement) and use the serial number of their purchased VOLCANO HYBRID as a coupon code. Storz and Bickel have assured users that all claims will be processed as a free-of-charge order. 
Please be advised that this article will be updated as new information comes to light or when the manufacturer releases any further statements regarding this issue.