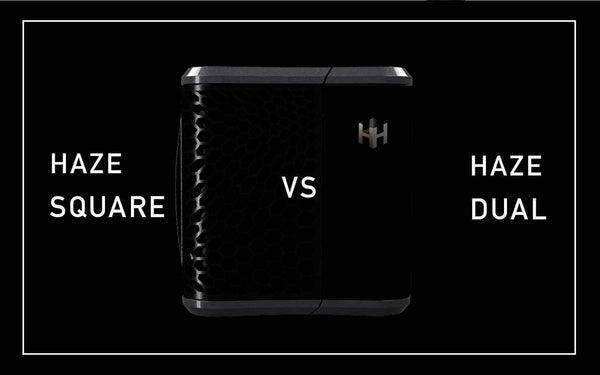 UPDATE: As of 12/31/18 Haze Technologies is no longer in business, the Square Pro and Haze Dual is no longer being produced. Check out our current top picks for best portable vaporizers.

The Haze Technologies, a company that was founded in 2013, produces vaporizers that have served as a game changer in the industry. They manufacture vaporizers that are made out of pure innovative design and system.

Indeed, the Haze Technologies evidently wants to bring a portable vaporizer that is filled with quality attributes that would easily get the enthusiasm of the market and mainly, its users. Thus, they produced two outstanding vaporizers that embody ultimate portability, longer sessions, and infinite versatility, the Haze Square and the Haze Dual.

The Haze Square is the first and only quadruple chamber vaporizer that exists in the industry. It makes use of on demand convection heating technology that has a heat up time of three seconds before it produces an on demand vapor.

It guarantees less delay to its users as it generates quality vapor to its users in an instant. There is no doubt as to why the Haze Square is one of the leading vaporizers in the market, for it is packed with features that make its enthusiasts multiply.

In addition, it also comes in two versions, the standard version includes DC wall charging, micro-USB charging, and five preset temperature settings from 360 to 430 F, while the pro version guarantees fast charging in a span of 30 minutes through USB-C and provides five preset temperature settings that range from 320-480 F by means of the Haze PC App.

The Haze Square contains four loading chambers that the users could fill with the dried herbs, dried herb concentrates, and oil, or even a combination of it. This vaporizer simply delivers extreme versatility for its users could not just settle for one desire, but multiple of it.

It also allows its users to be more prepared as they can pre-pack the components of their Haze Square. This unique feature completely astonished the vaporizer industry as they were the first to create it and was beyond successful with it.

Additionally, its battery could last up to two hours of continuous use. It would also indicate if the battery is low through the LED indicator found on the center and forefront of the device.

The LED color would flash red indicating low battery. Indeed, technologies are constantly evolving towards a more modernistic path and a portable vaporizer like Haze Square easily corresponds to the demands of the society.

It has the dimensions of 3 x 1 inches with a weight of 25 grams, making it a vaporizer that stays true to its portability. Its design is modeled to be a small and compact black box with an outer shell of aluminum.

Though it may not fit in every pocket, it is still one of a kind portable vaporizer that one could ideally travel with or to instantly bring on the go with.

When it comes to its quality and taste, the vapor production is different compared to the other vaporizes as it has four convection ovens. It yields a smoother and refreshing texture to its vapor due to chambers that are made of stainless steel. It is precisely a vaporizer that would take its user to great lengths in terms of the flavor of their vapor as they could make their own combinations.

Upon purchase, the Haze Square vaporizer comes with four material pods, two stainless steel concentrate pads, two silicone lids, mouthpiece, wall charger, cleaning tool, material tool, and a user guide. The company makes sure that its product has all the essentials one would need when it comes to owning a portable vaporizer.

The Haze Dual is the first and only dual chamber vaporizer that has been produced in the market. It allows the user enjoy their vaporizer with dried herbs, dried herb concentrates, and oils alternatively in a single session. It is ultimately made with portability and versatility that positively made a mark to its users.

It features dual chambers – for the means of allowing its users to indulge twice with its interchangeable chambers and letting them place two components, portable chamber canisters – so they could pre-pack it before going off to an outdoor trip or simply, if they are constantly on the go, replaceable batteries.

It does not only give out convenience, but it saves them from worrying that their vaporizer would run out, versatile vaping – as obvious as it is, it lets them experiment around and not leave them settling for a single taste, precision temperature.

They can choose from the four various temperatures depending on their preference, longer sessions – as this vaporizer makes use of lithium ion batteries assuring lengthy use, convection and conduction heating – it lets them decide which kind of heating element would suit to the taste and texture they want their vapor to be, cool vapor – for it has a patented heat exchange system that draws out cooled down vapor, new mouthpiece design.

Its height is discreet, while the top lip also allows the users to remove and adjust the mouthpiece easily, and lastly, ultimate portability – because of its modern and compact design, it sure is a vaporizer that is convenient to take anywhere and anytime.

It does not miss out on any essential tool that is needed with owning a portable vaporizer like the Haze Dual.

This trusted information is sourced from the manufacturer and our own experience with this vaporizer.